Well, Nolan has his first little league (read: tee-ball) game tomorrow morning and Linds took him to get his uniform last night. He’s on the MudHens, one of the first minor league teams I had ever heard of so many years ago. (I love the new logo and also would’ve loved if he was on the Yard Goats). Dick’s Sporting Goods is the team sponsor (possibly for the entire town program, so thanks to them.

He’s finally warming up to the MudHens name. He initially saw a volcano on a sample uniform at sign-up and wanted to sport their logo, but I think he likes the hen on the cap and shirsey (Muddy and Muddonna)

His team has six kids on it. Yes. you read that right: 6. Maybe it’s because I grew up in a town where baseball was king, we had enough kids on each team to field each position, but let me tell you, two adults and six kids per team is perfect.

The “head coach” deserves a ton of credit – he’s got feigned enthusiasm for days, something I try to pull off. Anyone over the age of eight can probably see right through it.

One kid sticks his ass in the air to fart and next thing you know there’s six asses in the air farting. Nolan had to pee, so he came over to tell me. I told him to go in the woods since we’re in the middle of a huge non-baseball field practicing.  Next thing I know there’s three other kids pissing in the woods. It’s monkey-see, monkey-do. And it’s hilarious.

We tried soccer a few years ago, to no avail, which I’m not that upset about. Sitting in a field watching kids flock to a ball like a pack of animals isn’t all that fun. Wait, that’s kinda what these six do at baseball practice too!?

Anyway, he picked up his uniform with Linds while I was baking them cupcakes and got this picture soon after: 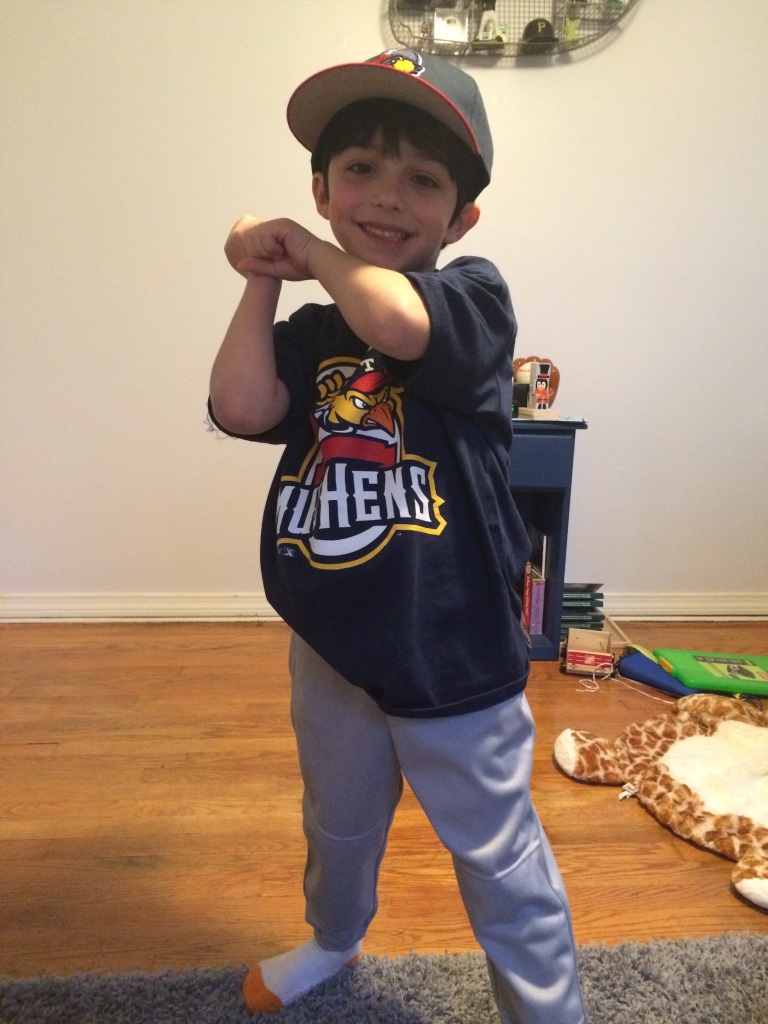 He looks ecstatic, despite swinging with an invisible bat, which makes me immensely happy. Not because he likes baseball but because he likes something (besides office supplies). At least for the time being. I could see him getting hit in the head with a bad hop and hating it forever but it’s still early enough to hold on to the hope that it’ll stick and he’ll enjoy it, whether he’s good or not.

He picked number two without even knowing the name of a player who shares the number. Yankees great Derek Jeter, Hall of Famer Nellie Fox, and Troy Tulowitzki. He likely won’t know any of these names – or remember them – for a few years but he picked two instead of one or three.

So, since baby three hasn’t yet arrived, it makes all the sense in the world that he’ll come tomorrow morning when Nolan takes part in the first athletic competition of his life (soccer was just instructional, no games). I’m not sure I could live with myself knowing at least one of us wasn’t at his first tee-ball game.

He’s smiling though, and even though he has yet to play a game, I’m proud of him. He listens to the coaches (he calls me Coach Dad) and he stays on task pretty well, despite whining occasionally that he’s tired. To be fair, 5:30 pm practices are a tough go for a 5-year-old who never stops moving.

Anyway, we’re still a family of four but hopefully by Monday we’ll have enough boys to man the outfield. Or front line for a hockey team (possibly the next sport he tries).