Not even a week removed from our visit to the glorious shores of Sea Isle City, NJ, I’m already longing for the return.

My father-in-law’s side of the family has spent countless summers “down the shore,” almost 30 years worth, and we’ve been fortunate to tag along a couple of times, including the past two years. 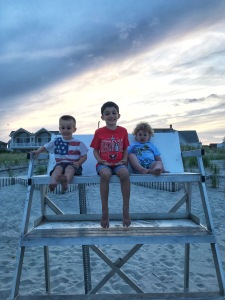 If a boardwalk with all the t-shirt shops, places selling hermit crabs and shitty magnets, and ice cream parlors (?) every third storefront is on your wish list, head to Ocean City or Wildwood. If you just want a relaxed, beach vacation, then Sea Isle City is your spot. It’s been relaxed because we’ve gone the week before July 4th this year and last.

We’ve rented the same house the past two summers, on a beach block literally 50 steps from the promenade and 80 from the sand. It’s the perfect location as far as beach proximity while also being equidistant to ACME (the quintessential grocery store of the Jersey Shore) and the center of town. We do a lot of walking but no one ever complains.

A few years back they added dunes between the beach and promenade as well as lengthening the distance between the promenade and the water (I think because of Sandy), but spending time feet from the crashing waves is worth the long-ish walk, a walk where the sand scorches the bottoms of your feet while creating that “survival reality show” feel. The kids don’t always make it to the packed, wet sand unassisted, so multiple trips walking across the lava sand are required, a small price to pay. 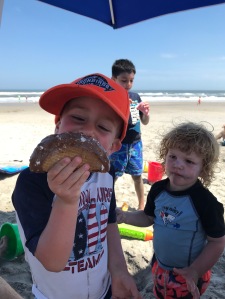 And you might be wondering what the hell Fudgy Wudgy is: it’s an ice cream cart pushed along the beach throughout the day, tempting kids and emptying parents’ wallets. Five beach days cost us roughly $50. And the kids look at the Fudgy Wudgy person with such admiration it’s comical. Austin hovers ridiculously close to them as other people make their selections, ultimately parting ways after following them a few hundred feet down the beach and three or four waves goodbye. (FTR, the boys have been calling out “2-ball screw ball” and “ChocoTaco” like the Fudgy Wudgy person for the past six days.)

We drove an hour to catch a Yankees-Phillies game at Citizens Bank Park, still one of the best ballparks to see a game in. (Yankees won, 6-0).

If the beach, baseball, and Fudgy Wudgy aren’t enough, here’s a longer not-so-comprehensive list of some of the reasons I love Sea Isle City, NJ:

The only drawback is lack of coffee options for early risers – everything seems to open at 7am – but for all intents and purposes, Sea Isle City is all aces.

So, if you’re looking for a destination down the shore, look no further than Sea Isle City. Oh, and it’s only 35 minutes from Atlantic City, if gambling is your thing.

2 thoughts on “Sea Isle City: the beach, Fudgy Wudgy, and much more”